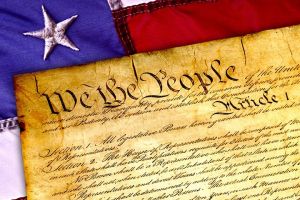 The late author James Michener wrote a book entitled Presidential Lottery that was published in 1969.  Excluding its appendices, the paperback version comes in at 126 pages, making it one of Michener’s shortest books (many of his novels exceed a thousand pages; I always thought that his books became fascinating once the reader gets past page 300).

Presidential Lottery, though, isn’t a novel.  After serving as an elector in the Electoral College (EC) for the 1968 Presidential election, Michener wrote it as a strong warning that the constitutionally mandated method of electing U.S. presidents – namely, the Electoral College – would at some point be a tool for abuse by the party system and defeat the notion that the U.S. electorate actually selects the President of the United States, directly or indirectly.

Here’s what happened in the 1968 election:

The 12th Amendment to the U.S. Constitution establishes that the candidate who gains the majority of the Electoral College votes wins the election.

Note that the words used in the 12th Amendment are the majority of the EC votes  Not “the most” EC votes.

That’s why, given the current U.S. population, the successful Presidential candidate must receive 270 Electoral College votes – not just more EC votes than the other candidates.  There are 538 total EC votes; while it is mathematically possible to achieve a tie situation, where the candidates of both major parties each receive 369 votes, it is practicably unlikely and the benchmark of 270 EC votes establishes a clear majority.

So in the 1968 election, had Richard Nixon only received 32 fewer EC votes and only reached a total of 269, he would not have been the clear winner of the election.  And even had those 32 votes gone to Hubert Humphrey, his total EC votes would have fallen short of the majority requirement of 270, because Humphrey’s total would have only been 223 (191 EC votes received + the 32 votes being discussed).

Michener put forth another scenario:  Let’s suppose third party candidate George Wallace received those 32 EC votes, which would have brought his total from 46 to 78.

Technically – as anyone who’s watched Veep on HBO this season knows – in the event that a candidate does not receive the majority of available EC votes, the election then moves to the U.S. House of Representatives.  No state is bound to its EC results, because the EC results clearly failed to elect a President.  In a special House election, each state casts one vote to select the President.

Michener posited that such an occurrence would give enormous power to the third party candidate to “barter” their votes to either party in exchange for promised appointments, orders and legislation.

George Wallace was an undisputed racist while in public office.  As a Democrat who retained adherence to Jim Crow laws, he served (non-consecutively) a total of 16 years as the Governor of Alabama.  In his inaugural address after being sworn in for his first term, his speech included the following:

“In the name of the greatest people that have ever trod this earth, I draw the line in the dust and toss the gauntlet before the feet of tyranny, and I say segregation now, segregation tomorrow, segregation forever.”

For these (and other) reasons, James Michener, the author of many painfully (to most) accurate historical tomes, believed the Electoral College should be abolished.  Forty-eight years ago.

Twelve Presidential cycles later, we have experienced two elections where the candidate who received the most popular votes did not receive the majority of the EC votes, and therefore did not go on to be President.

The scenarios Michener puts forth present some compelling reasons to eliminate the Electoral College.

However, let’s turn to the matter of third party candidates running for President.

If a third party Presidential candidate gains 270 EC votes, what’s arguable is whether the third party candidate is actually “third party”.  Oh, he or she may not have a huge party apparatus supporting them, but practically speaking, that’s just not going to happen outside of a Robin Williams movie (and even in his Man of the Year, the voting machines contained a coding flaw that erroneously skewed the election results in his favor).

It would seem that founding fathers envisioned that only two major parties would be featured in United States politics at the Presidential level – hence, the majority language in the 12th Amendment.  It was their hedge against populist presidents.

I can respect that a voter dislikes the candidates of the two major parties so much that voter feels compelled to vote for a third party candidate.

I can respect the sentiment, but not the action.  For the reasons described above, the act of voting for a third party candidate would seem to be somewhat asinine (in my opinion).

Votes for third party candidates in certain states were one of the major factors in bringing Donald Trump to the Presidency.  And for third party voters who “voted their conscience” or, as Susan Sarandon does, believed Hillary Clinton was “possibly more dangerous” (WTF, BTW!) than Donald Trump, all I have to ask is this:  How do you feel about the future, given Trump’s actions over the last five weeks?  Feel good about the Dakota pipeline?  Feel secure that the U.S. will be vigilant in mitigating the effects of climate change under a Scott Pruitt EPA?   Do you like where the federal budget is going?

I can appreciate that many don’t like the current state of the Democratic Party (or the Republican Party, either, for that matter).  The thing is, when it comes to presidential elections, a third party that isn’t a major party isn’t the way to go because it’s damn near impossible to win, according to the Constitution.