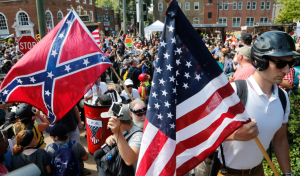 White supremacists (add one letter and it’s “Supremracists”, get it?) rallied in Charlottesville, Virginia last night and today, carrying Confederate, American and Nazi flags. Because this was a planned event to ostensibly “Unite the Right” (a bullshit cover name if I ever heard one), counter-protests were planned. The Confederate/Nazi/American rally resulted in three – so far – deaths and dozens of injuries.

The Supremracists were angry that Confederate memorials were being taken down throughout the South. If you recall, Governor Nikki Haley signed a law banning the Confederate battle flag from the South Carolina capitol grounds just two years ago following the mass murder of African Americans in Charleston by white supremacist Dylann Roof.

Specifically, the Supremracists were enraged that Charlottesville plans to remove the statue of Confederate general Robert E. Lee from its Emancipation Park (yes, it’s an oxymoron). Their position seems to embrace both a love of what the Confederate States of America represented and a twisted sort of United States of America patriotism.

If you’re the type of southerner (or northerner) who celebrates the South’s “glorious” past doing what you might think are innocuous things like having (or attending) destination weddings at former slave plantations, you’re buying into the bullshit notion that this past had some sort of romantic aspect to it. It didn’t. While you attend or participate in that wedding, you might just be standing on ground that was sweated over or bled on by slaves. There’s no way that can be called a romantic past.

And those are the NICE people who buy into this bullshit. If you’re an American Southerner who sports a Confederate flag, whether as an actual flag or decal or pin or picture or in any form, YOU are an alien in this country who refuses to assimilate into the United States and embraces terrorism against this country.

The Confederate flag was the flag carried into battles that, all told, resulted in the deaths of more than 620,000 Americans (including the rebels). In the United States’ 241 years of existence, that is nearly one-half of the roughly 1,264,000 American deaths in ALL THE WARS in which the U.S. has participated, including the Spanish-American War (which we tend to forget) and the Iraq-Afghanistan War.

The Confederate flag was the flag under which the South waged war to retain their unholy (and mistaken) right to own and fully control other human beings as slaves. The South wanted to keep the right to own other people, to breed them, work them to and/or until death, sell off members of a slave family – who would never see each other again in this lifetime – for their own gain and prosperity. Most Western countries had, by the start of the Civil War, abolished slavery – yet the South caused 620,000 American deaths to continue doing this.

[Of course, most Western countries are far ahead of the U.S. when it comes to health care coverage, too. Once again, they’re right and we’re wrong.]

There is nothing romantic or that should cause one to be nostalgic about the glory days of the South. They are what they are (or are what they were?).

And nothing about the Civil War should be celebrated. It, and many of the years that followed, was an American tragedy that has reverberated negatively through the intervening 152 years since its end. Its impact is still domestic terrorism in this country.

You cannot be a good U.S. citizen and carry both a Confederate flag and an American flag.  You cannot take part in a rally with people carrying Confederate flags and describe yourself as an upstanding U.S. citizen.  It should, by the way, go without saying that rallying alongside anyone carrying a Nazi flag means you don’t identify with U.S. values at all.  You cannot embrace what the Confederacy did and represents and call yourself a U.S. patriot, because you are really a terrorist sympathizer.

It’s about damn time that every memorial celebrating the Confederacy and its so-called heroes be destroyed and that every Confederate flag be burned. Supremracists, it’s time to be citizens of the United States and not the terrorist organization that killed more than half a million of us.  You have your full right of free speech (and even of assembly!).  All other Americans have the right to see you for what you are.  It’s totally your choice.

And I could be wrong (although I doubt it, based on the number of Make America Great Again caps sported by many of the rally participants), but I bet a paycheck that the vast majority of these Supremracists are anti-immigration. I bet that they believe that the U.S. should administer a litmus test of sorts to determine that only the “right” kind of immigrant be allowed into this country – and the “right” kind of immigrant must fully assimilate his or herself into our culture. They have to speak English and cede their cultural practices to ours, right?

Of course, if you can’t find it in your souls to let go of your terrorist sympathies, I suggest the litmus test you want to apply to every other immigrant be used on you.  When you fail this assimilation test, I’m sure you’ll agree that we don’t need your terrorist ass in this country. But maybe before we lock our doors to you, you should just leave on your own.

And don’t let the door hit you in your racist ass on your way out.